I have gathered some of my reference photos that show the Power Droid from “head” to toe, and I have been trying to get a feel for the Scale of the body. I know that this is not an exact science, the way I have chosen to do this part, but I think it will serve my purposes… I am simply taking selected images and scaling them so that the Droid in the picture stands 1.1 Meter Tall (as I determined in an earlier post) then measured various other dimensions in the image to try to come to some kind of consensus by averaging what I find.

I started with a common drawing found on the Wookieepedia which is a Technical Drawing labeled as EG-6 Power Droid Schematic (Troy Vigil). There is nothing about this drawing that suggests that it is to scale, or any indication of the reference used, so of course I’ll keep that in mind as I move forward. Interestingly, if I set my scale so that the EG-6 is 1.1m tall, that makes the 3PO in the drawing 1.67m tall, close to the Height that I determined New Essential Guide To Droids lists C-3PO at but still shorter than Anthony Daniels… OK, I’ll put a pin in that for now and get some dimensions of the EG… This gives me some interesting points to ponder. 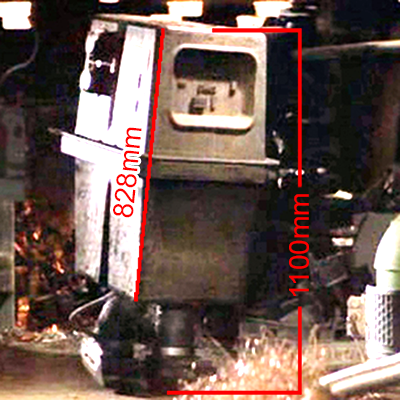 Moving on, the next Droid I measured was the Sandcrawler Gonk. This is the one seen strolling around in the dark when R2 and 3PO were abducted by the Jawas… I bumped the exposure a bit in the Screen Grab and set to measuring up the Droid. When scaled to a height of 1.1m, the body on this guy measures about 828mm. Accounting for the fact that I have no control over the camera angle or another distortions in the image, this is pretty close to what I found in Troy’s isometric drawing above. I then moved on to the PD at Lars’ Farm. This one, when scaled for height, had a body height of approximately 823mm. Again, though not entirely scientific, this dimension is reasonably close to what I found with the Isometric Drawing. However, the Length of the body seems much shorter. In fact, just casually comparing the two images shows the proportions are different, with the Lars Droid shorter (or taller) than the drawing. Next, I grabbed the Gonk seen in the Flight Deck scene in Rogue One. Again I had to punch up the exposure to get a good view of this guy. Here I found that the body is MUCH shorter than all the others I have measured. OK, Huge revelation… I have no control over these images! I did not take the photos and I don’t know anything about camera angles… This guy may have been Comped into the scene (maybe) and looks like he may be squashed a bit. He is Short and Fat compared to both the Sandcrawler Gonk and Lars’ Gonk…

I know I have been using very un-scientific methods… a forensic professional would just shake his (her) head… In the end, I know that I will just wing it to a certain degree to come up with my numbers, but this exercise has not been a waste of my time (even if reading it has been a waste of yours). I learned more than a few things, and I have another idea to get through before I start my drawings.

These images are freely available on the webs. I don’t intend to infringe on anyone’s IP or copyright. Star Wars is a property of the Walt Disney corporation.